Panic call received, CrimeWatch responded within three minutes, one suspect apprehended with cash in a bag.

Hot off the press today at 09:57, there was an armed business robbery panic call received to report the incident at the Shell Garage KFC Turn Club, near Gallery Centre. CrimeWatch Officer Veary and Officer Jonathan arrived within three minutes of the call to investigate and assist, and the Crimewatch CR Operator called the site and the cashier report that a robbery was in progress. CrimeWatch then dispatched Officer Manelisi to back-up and assist. Officer Veary apprehended one suspect fleeing with a bag of money in Derby Close. Saps and MRNW were informed and arrived on the scene to assist, and the suspect was handed over to SAPS. Officer Veary confirmed that there were two other suspects involved one was armed with a firearm, and they were unable to safely apprehend them.

Well done Crimewatch Officers Veary and Team, along with MRNW and SAPS. 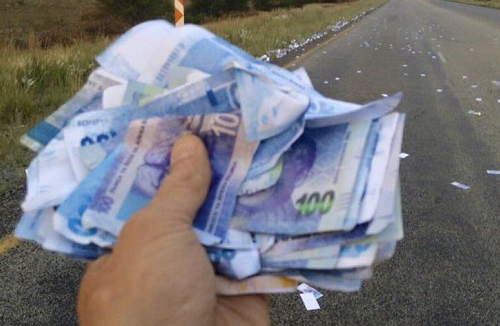